Duke Saraie[1] specializes in the health of the human body and soul, through a particular field of exerciseーwalking. 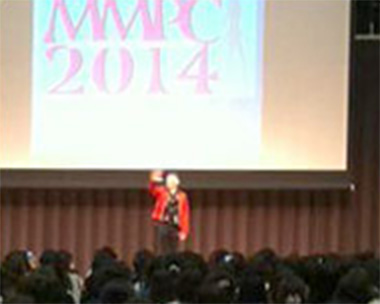 His method, Duke's Walk, has revolutionized the act of walking as a transport median or a leisure, into a healthy fitness regime to generate happiness in people's lives as well as to help maintain your ideal body shape.

His concepts and the odd body movements were not received very well 20 years ago, when he first began to open his classes in Japan. However, many researchers, doctors and physicians have analyzed the effects of his regime and his method is now widely recognized as a prominent way to be fit. 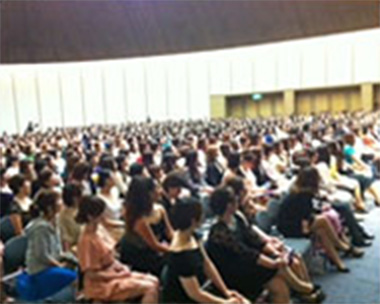 It all began when his mother was diagnosed with an illness and, under the doctor's suggestion, she walked along the beach every day as a home remedy. Even when her elderly body gave out with pains in her knees and back, she did not give up. But instead of recovering, she fell down a staircase and ended up in a wheelchair. From then, it wasn't long till her lively spirits diminished and she passed away.

"To me it was, above all, ironic. My mother had walked to live, not to die. It felt even worse because she was unable to see her long-awaited grand-daughter, who was due in a month." 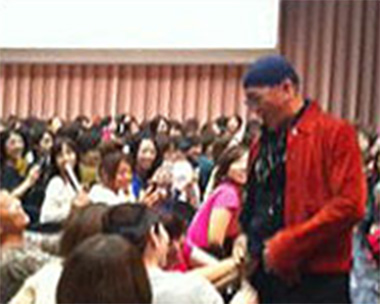 repeats Duke sorrowfully, even after all these years.

But instead of crying over her, he put all his anger towards research. He wanted to find out whether or not walking was truly good for the body. So he read numerous books and studied physiological theories and different types of training methods from various cultures: Yoga, Martial Arts, Qi, Ballet, Pilates, Respiratory techniques and so on.

"As I examined these, I began to form a method of my own. By mixing and matching the best combinations and appropriate methods together, I created a whole new method, which I call ‘Duke’s Walk’." 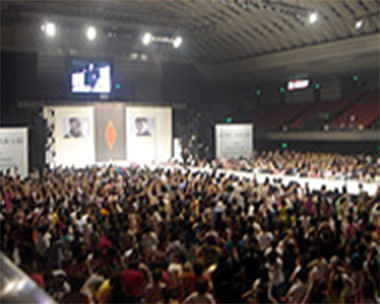 So what is it that makes Duke’s Walk unique from others?

A TV show assembled a project and carried out an experiment to find this out. They attached dozens of measuring instruments to his body and a volunteer’s body, and asked them to walk as they would normally. 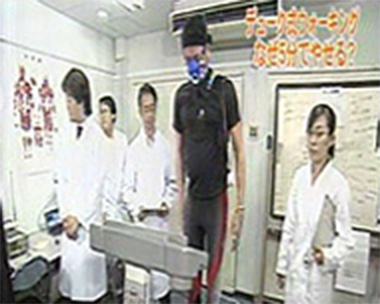 The outstanding results were that, the way Duke walked caused the pressure on his knees to be reduced by two-thirds, with respect to the way the volunteer walked.

This proves that, by doing his exercises and thus walking correctly, there is less burden of our body weight on our knees, and even if you don’t realize the short-term results of this, it will be immensely beneficial to you in five, ten or twenty year’s time.

Another great advantage of Duke’s Walk is effective dieting with immediate results. 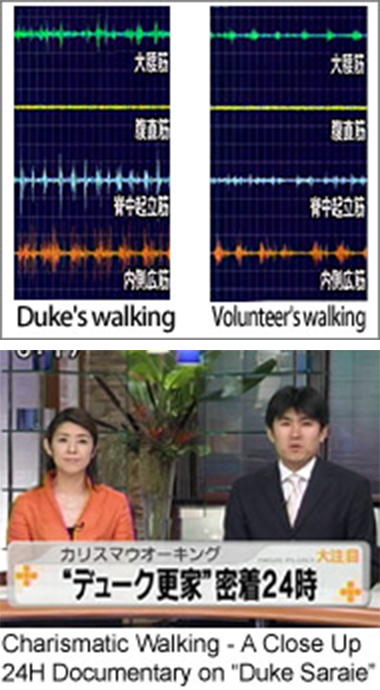 Nowadays, there are many theories as to how different lengths of exercise and regimes give effective results, but when Duke first introduced his method, it was still widely believed that you needed to exercise at least 20 minutes before fat starts to burn. So what a discovery it was when experts found that with Duke’s Walk, it only takes 5 minutes! So you can easily include that 5 minutes in your everyday routine.

his is why Duke’s Walk became an instant hit with the Japanese media and the public for dieting. But it was soon accepted and praised by many physicians and doctors across the country as a health measure. 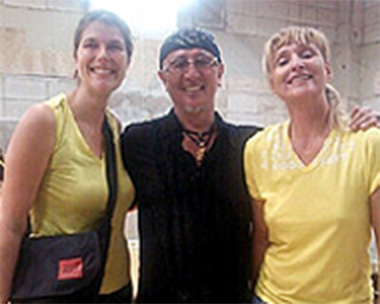 But Duke’s Walk is not just a remedy to bad walking habits. It is a training scheme that strengthens the correct inner muscles and performs natural chiropractic adjustment of your body. By doing his exercises on a regular basis, it leads to correcting your walking and keeping your body healthy without any conscious effort. 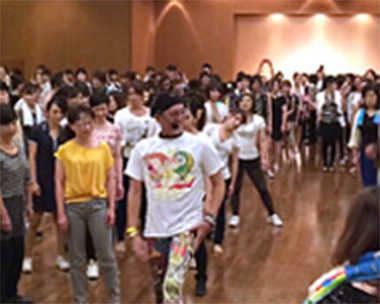 This is because Duke’s method allows you to train the body’s inner muscles effectively. These are muscles that are actually the most important in the human body but they aren’t commonly known because they are muscles that are hidden behind the outer muscles. Professional athletes have long been able to train these muscles through intensive training but only recently has it become more known worldwide. 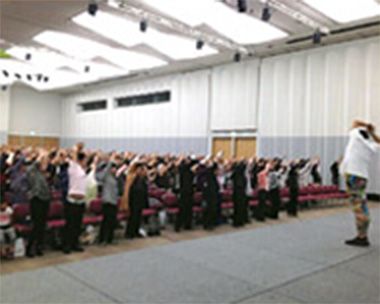 All these things are possible with fast results because he has combined the best practices of different methods from across many cultures together. But the most unique thing about it is that Duke is constantly updating his methods according to new scientific discoveries. These updates are constantly requested by the media and is made available to the public through tv, magazines and books. 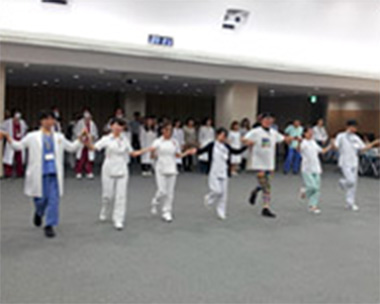 Duke flies all over Japan to speak at conferences, universities and companies to explain his method and philosophy in a entertaining and charismatic manner. By the end of the show, the audience often find themselves standing up and doing the exercise with him. His conferences are very popular and are attended by hundreds and thousands of people and some big public events host up to 10,000 people. Consequently, the number of people Duke has taught rises up to 1,000,000.

Today, Duke Saraie is the founder of the Duke’s Walk Institute in Japan, where he has trained 700 instructors for 14 years to spread his method and philosophy. . 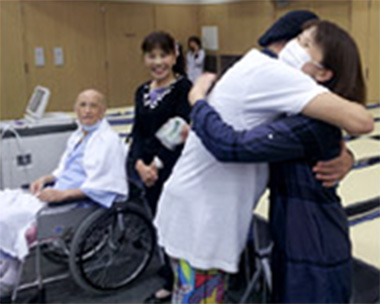 Duke also reaches out to the public through charity events. He visits various public schools on a regular basis to teach children the best way to exercise and consult teachers on how to conduct sports classes. He also goes to help revive areas affected by natural disasters and offer medical assistance at rehabilitation hospitals.

In honour of the work he has done, he has been given several awards:

In 2002, Japan Culture Promoting Association awarded him the Social and Cultural Distinguished Service for the second half of the year. In October 2004, he was granted an honorary citizenship status from Shingu City, in Wakayama, for his great contribution to enhancing people’s health awareness through his unique concepts and original walking exercises. In November 2004, he received the Wakayama Prefecture Culture Award encouragement prize. 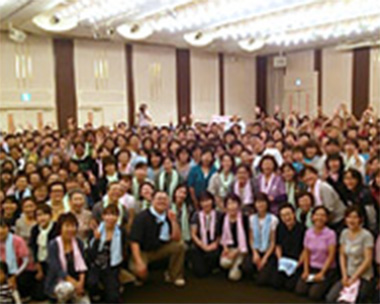 At present, there are 17 books and 10 videos and DVDs produced by Duke. His ultimate bestseller, “1 Meter Walking Diet” which was published in 2003, sold 500 000. In 2007, a Nintendo DS game was created, where you can enjoy his exercises in a convenient way.

His regular TV show lasted for 4 years and a half with a very successful average program rating of 21.5%. 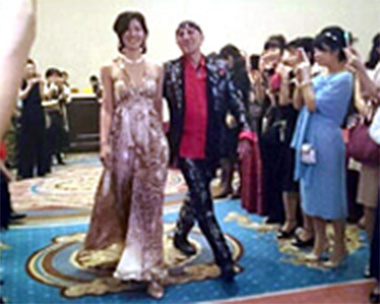 [1]Duke takes his artist name “Duke Saraie” from his family history as one of the ancient Duke families serving the Japanese Emperor.

Born in 1954, Takuya Saraie, grew up in the Wakayama prefecture and later moved to Osaka and Tokyo.

In his 20s and early 30s, he worked as a fashion show director and he spotted and coached many talented young models, who have grown to become supermodels and celebrities in Japan.

Since 2002, he lives in the Principality of Monaco and travels back and forth to Japan.